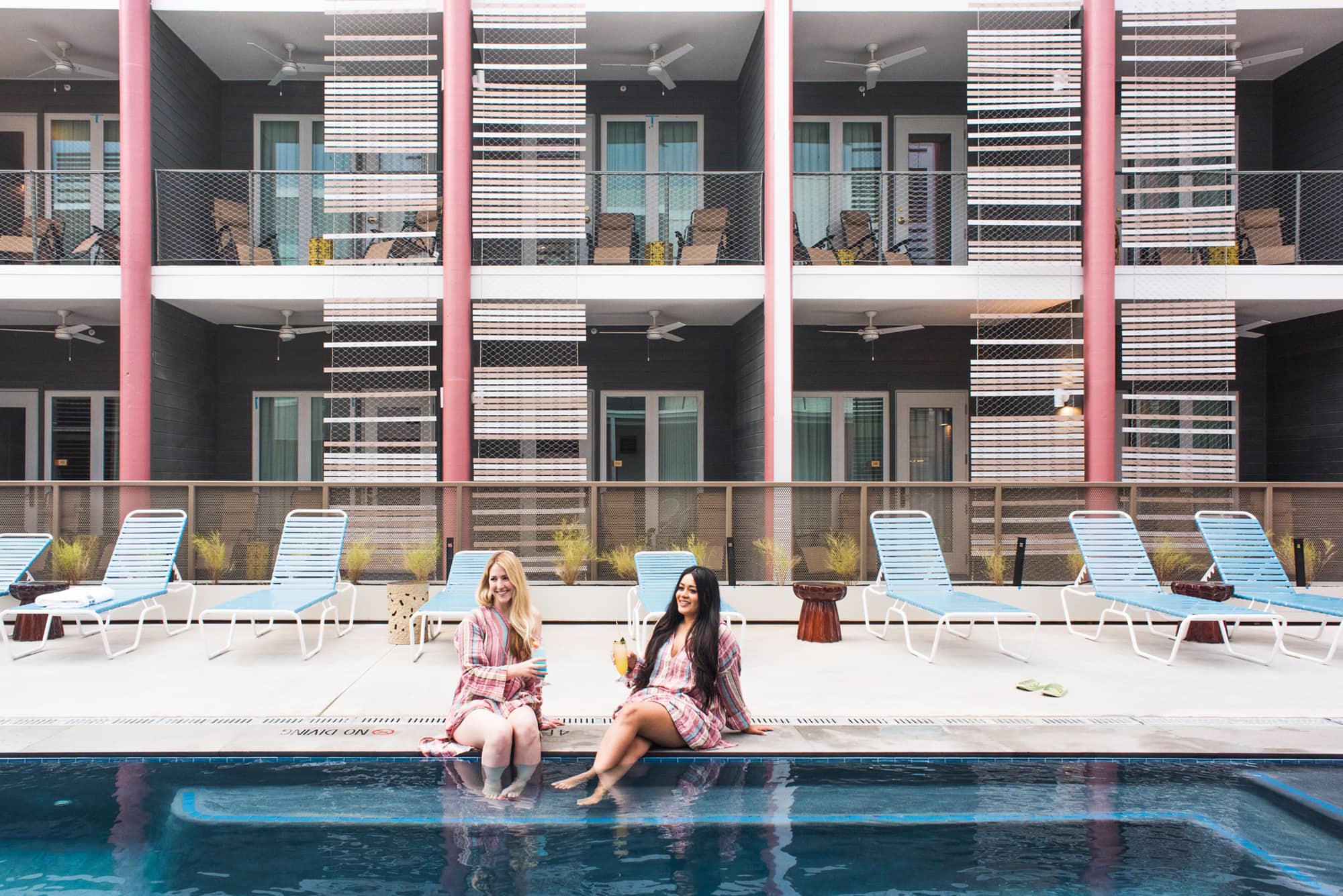 What to do in Austin

There’s always something fun happening in the Live Music Capital of the World! Whether you’re coming into Austin for a specific festival, conference, or event—or are just enjoying our 300 days of sunshine and gorgeous outdoors—you can expect to participate in something very “Austin” any time of the year.

Here’s the very best ways we’re Keeping Austin Weird all-year-round in the city close to our hotel near SXSW and the UT Austin campus in TX.

Start of your new year with the Polar Bear Plunge at Barton Springs Pool, the city’s infamous spring-fed swimming hole that’s a brisk 68 degrees every day. Free Week takes over East Austin and downtown music venues with live music free of charge for the first part of the month. On MLK Day, the East Side celebrates the legacy of Martin Luther King, Jr. with a march and parade to Huston-Tillotson University.

Things get colorful in February with the celebration of Carnaval Brasileiro and OUTsider Festival, which brings together Austin’s LGBTQI community for inspiration and creation of art, music, performance, and more.

Things get busy in the Capital City in the month of March due to the ever-expanding South by Southwest festival. Whether you love music, film, technology, education, sports, or practically anything else in between, SXSW (or South by as the locals call it), will have a little something for everyone. The whole city gets into the fun, as hundreds of unofficial events will pop up throughout the 10 days of the festival. March is also when Rodeo Austin moseys into town. Guests can enjoy a family-friendly fair, great food, music, and, of course, several rodeo events. If horses aren’t your thing, get your heart pumping out at the Circuit of the Americas with the IndyCar Classic. Slow things down with the Dell Technologies Match Play, a weekend golf tournament that brings the top 64 golfers in the world to Austin. And, finally, one of the most fun events happening in our city every March is the ABC Kite Fest in Zilker Park, where kids of all ages will enjoy seeing the gorgeous Texas sky dotted with kites of every shape and color.

From comedy to cooking, April is jam packed with fun festivals in Austin. Music is still very much at the forefront of events this month, as the Old Settler’s Music Festival celebrates the Americana genre. Comedy fans will love spending time at the Moontower Comedy Festival, which typically brings in national headliners as well as introducing festival goers to local comics. The fastest drivers on two wheels race on the COTA track during the MotoGP Grand Prixe, while art lovers descend onto downtown for Art City Austin. Austin’s largest food festival excites all the city’s foodies with celebrity chefs, tons of food, and a copious amount of wine during the Austin Food + Wine Festival. And, for something completely weird, hundreds gather in Pease Park to celebrate the lovable grumpy donkey for Eeyore’s Birthday. (Yes, we’re serious, y’all.)

The Cine Las Americas International Film Festival honors Latinx voices with its annual film showcase, while one of the oldest art festivals in Texas takes over downtown. At the Pecan Street Festival, which occurs once in the spring and once in the fall, families gather for shopping, art, food, music, and so much more. Carnivores will love visiting Austin during Hot Luck Festival. Combining music and meat, this relatively new event dazzles fans with its incredibly fun parties and talented chef lineups.

Small screen stars head to Austin every June for the ATX TV Festival. From reunions, panels, and parties all in celebration of television, anyone who’s seen a TV show ever is bound to have a great time. Republic of Texas Biker Rally (known as ROT Rally to locals), is definitely a unique time to visit Austin. The decibels increase as the motorcycles start to roll into town. We all scream for ice scream at the annual Austin Ice Cream Festival. There’s no better way to beat the heat!

Things quiet down as the temperatures start to climb—what a perfect time to stay in a pool! But, the fireworks burst as the Austin Symphony plays its annual Fourth of July show.

As summer starts to wind down, Pride heats up! Austin Pride Festival lasts for an entire week and culminates in one of the largest Pride parades in the country. August is also the time of year where we celebrate our colony of bats at the South Congress Bridge with Bat Fest.

From films to museums. this month is one of the best to enjoy Austin’s cultural scene. Fantastic Fest focuses on all things weird with films, parties, wacky events, and more. The Alamo Drafthouse’s annual film festival is the largest genre fest of its kind. Bringing even more oddities is Wizard World—expect plenty of cosplay characters, nerds, and sci-fi celebs. Austin Museum Day is a great way to expose your kiddos to Austin’s art scene for free, while the fall Pecan Street Festival rounds out the month of artsy events. But, more importantly, if you bleed burnt orange, September is the arrival of University of Texas Longhorn football season.  Luckily, the East Austin Hotel is less than two miles from the DKR Stadium. Hook ‘em, Horns!

Vroom, vroom. The largest racing event of the year heads to the COTA with Formula 1 weekend. Not only do the fastest cars hit the track, but some of the biggest names in music hit the Austin 360 Amphitheater stage (like Britney Spears and Taylor Swift, just to name a few!). Levitation music festival was originally founded as Austin Psych Fest by the Black Angels and has now grown to a large music fest spanning multiple venues. Stroll down Waller Creek at night as it’s lit up for the annual Creek Show public art event.

It’s the most wonderful time of the year! Along with several smaller Christmas light shows, the Zilker Park’s Trail of Lights has been a family tradition for more than 50 years! Don’t forget to spin under the big tree of lights. Get all your holiday shopping done while having a boot scootin’ good time at the Armadillo Christmas Bazaar.

No matter what time of year you visit Austin, the East Austin Hotel is bound to be a wonderful home base for all your adventures, since it’s close to downtown Austin, where most of SXSW happens, the bustling East Side, Austin Convention Center, and a super short drive to UT Austin for Longhorn football games!